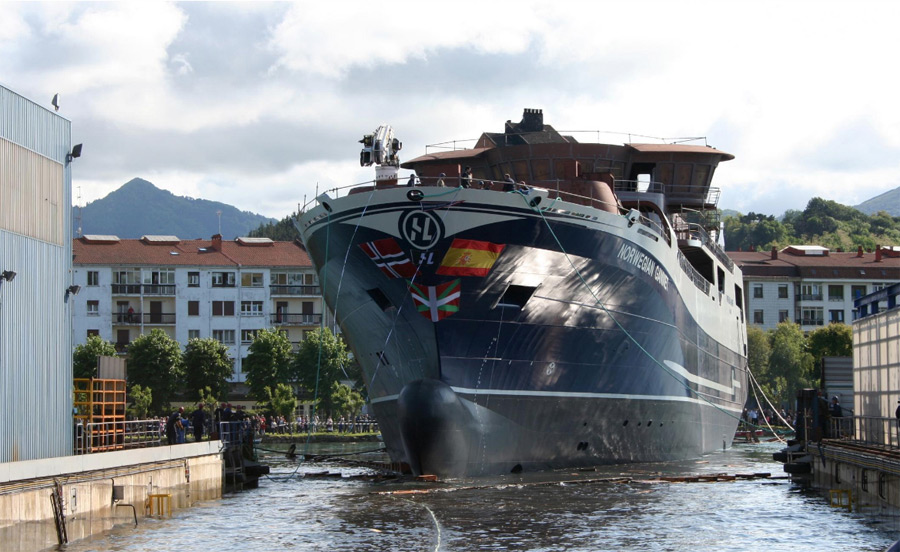 Launching of the Norwegian Gannet, which Alconza helped develop

Shipowners Hav Line Gruppen’s Norwegian Gannet, is the largest ship to be built by Balenciaga, the Gipuzkoan shipbuilders.
It will process and transport Salmon from Norway to Denmark

Alconza manufactured an electric propulsion system for the Norwegian Gannet, the first hybrid ship in the world dedicated to the aquaculture sector, moreover, it is the largest ship built at Astilleros Balenciaga (Zumaia, Gipuzkoa) to date. The participation of Alconza has meant yet another example of its commitment to advancing in environment friendly sustainable marine propulsion technologies. The ship will be used to process and transport salmon from the Norwegian coast fish farms.

The ship belongs to the Norwegian shipowners Hav Line Gruppen and will be delivered in August, since its construction is now in the final stage. The shipowners commissioned the engine design and manufacture from the Finnish company Wärtsilä, which will supply Astilleros Balenciaga with an integrated solution combining the 10 cylinder Wärtsilä 31 main diesel engine with the electric propulsion system manufactured by Alconza. Electric propulsion can provide excess power on demand, thereby reducing fuel consumption and also absorb engine load fluctuations. Besides being a highly efficient method it also minimises emissions.

The Norwegian Gannet is one of the most complete and sophisticated ships in the sector, besides being able to process 150,000 tons of salmon per year. Its headquarters is in Bergen, and it will transport fish from the Norwegian coast to Denmark three times a week. Ship transport will have a very positive environmental impact, since it will considerably reduce the emissions associated with the entire process. To be precise it will avoid sending 150 refrigerated lorries a week on the roads thereby achieving a carbon footprint reduction estimated at 7000 tons per annum.

In addition to the design, Wärtsilä is responsible for manufacturing an integrated solution comprising: said 10 cylinder Wärtsilä 31 diesel engine, propulsion machinery, remote control propulsion and automation systems, likewise the Alconza electric propulsion system. The engine produces 6100 KW of power and has been designed to meet the customer’s requirements besides ensuring a functionally efficient and ecologically sustainable solution.

The ship hybrid propulsion machinery has a battery driven PTI/PTO (power take-in/ power take-off) system combined with the main diesel engine. Configuration of the ecologically sustainable hybrid battery is absolutely innovative for this kind of ship.

Norwegian Gannet is 94 metres long with an 18 metre beam; 10.30 metre moulded draft and weighing 4000 tons. Its interior has room for a crew of 53, most of whom will be dedicated to processing the salmon from the fish farm, which may reach a total of 1000 tons per voyage. Astilleros Balenciaga had to meet a high level of demand in its construction for both vessel dimensions and technological requirements.

The crew’s accommodation was one of the most important features when designing the ship and its work spaces pursuant to the high standards of quality Norwegian shipowners generally demands. One deck has a conference room chiefly designed to receive prospective customers and fish distributors. The ship has also been designed to meet EU sanitary requirements for fish processing.

Further information on the Norwegian Gannet at:

Alconza supports the electric motors lifecycle regardless of the OEM, by providing tailor-made solutions and services
28 December, 2022

Alconza delivers the 2 permanent magnet propulsion motors to the vessel of the year, MS Medstraum
7 December, 2022

Further to the release of the Basque Maritime Forum’s Bulletin no. 60 we would like to share some highlights from recent months in Alconza.
21 November, 2022