Gorona del Viento El Hierro S.A. has been the company responsible of the development and operation of the project “Hydro-wind power plant of El Hierro”, thanks to which El Hierro will be the first electrically self-sufficient island using exclusively 100% renewable energy sources (wind and water). It is estimated that the annual savings in diesel will be about 2,000,000 €.

a) Wind farm: it consists of 5 turbines of 2,3MW each, with adjustable blades for a better use of the wind potential.

b) Hydroelectric substation: consists of 2 deposits (the superior of 380,000m3 and the inferior of 150,000m3), 4 speed regulated turbine groups with generators and flywheels of 2,825MW each manufactured by ALCONZA, and a pumping station of 6MW in total.

c) Emergency station: in case the wind farm and the hydroelectric substation is not in use (due to the lack of wind and water, because of any technical failure or just due to maintenance works being developed in the system), the thermal power plant power of Llanos Blancos would function as it has been doing till the construction of the hydro-wind plant of El Hierro. 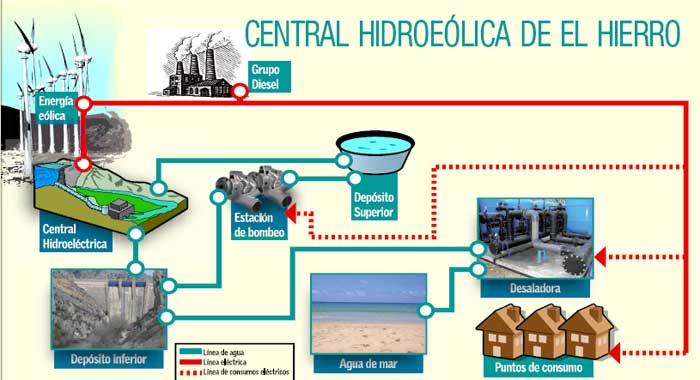 This pioneering project supported by national and international bodies could in the near future be extrapolated to other sites that wish to have a system of isolated system of generation.

On World Quality Day, Alconza is reaffirmed as the reference in environmentally sustainable marine motors
11 November, 2020
New milestones for Alconza management systems
15 September, 2020
Alconza receives an eligible investment of over EUR 800,000 for technological development
22 March, 2019
Tenneelva HPP, new contract
19 March, 2018
Smakraftdagane 2018
12 March, 2018
Recent Posts
Go to Top
Alconza - We have been designing and manufacturing motors and generators for over 60 years.
Cookie Notice. This website uses its own and third-party cookies. You can accept the use of cookies or manage your settings.
Cookie Settings Read more Accept Reject
Privacy and Cookies Policy